The Anglo-Russian War: Skirmish at the Border, The Conclusion 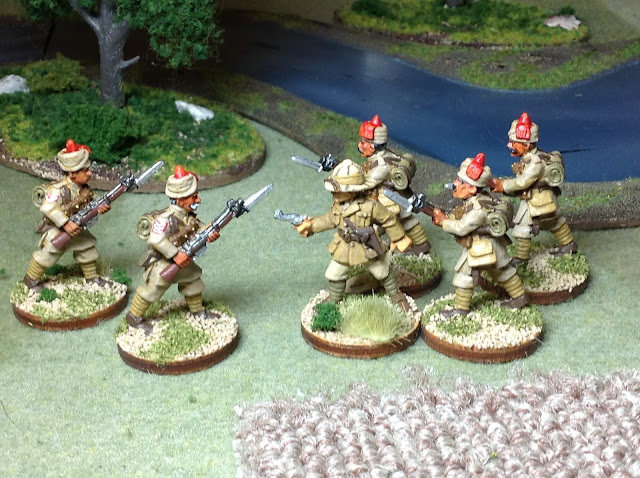 "Sahib. There are Russian forces in Chaimbellistan."
Continuing with our game of The Men Who Would be Kings: Bandits/Smugglers/Criminals are attempting to smuggle weapons, gold and other materials through the nebulous border area separating Asian Russian with the Princely State of Chaimbellistan. Captain Agorov of the 21st Frontier Guard Company has been ordered to stop them but his map is quite unclear where Russian territory ends and Chaimbellistan begins.
One bandit group has been destroyed but the criminals have not be caught yet and the British are concerned that Russian troops have violated the territory of Chaimbellistan . . . 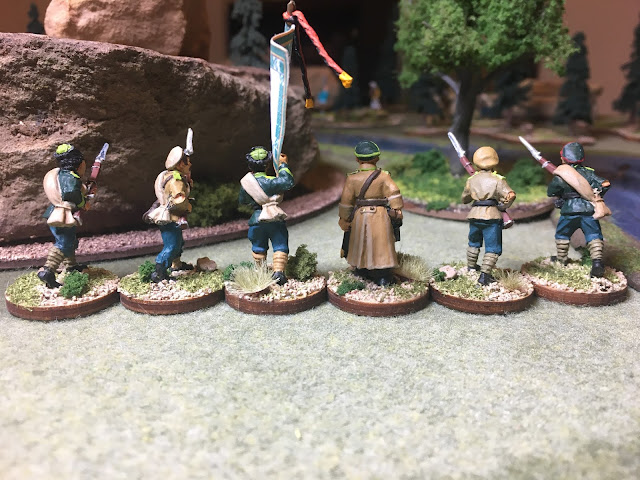 Captain Agorov has placed his men in close order at another choke point to block the bandits. 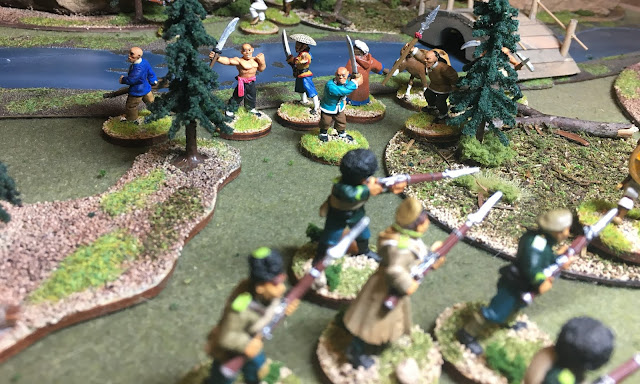 Bandit group #3 activates 2 turns in a row! They recross the bridge and fire on Sergeant Zaytsev's men which have just wiped out Bandit group #1. 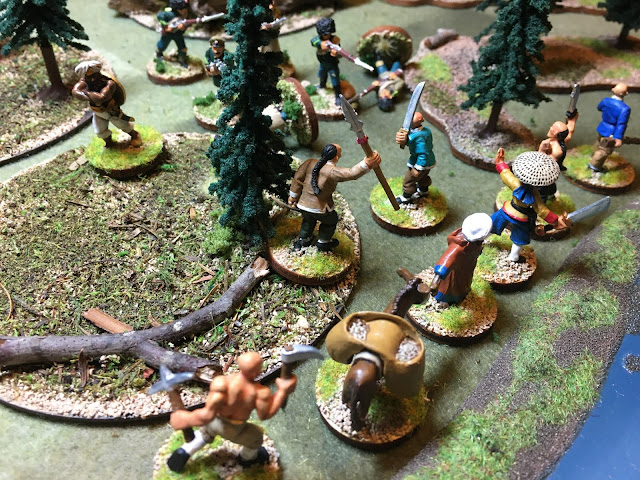 Even though they have obsolete rifles, at close range they Bandit group #3 fells two of the Russian Frontier Guard. The Keen Shot Leadership trait came in handy. 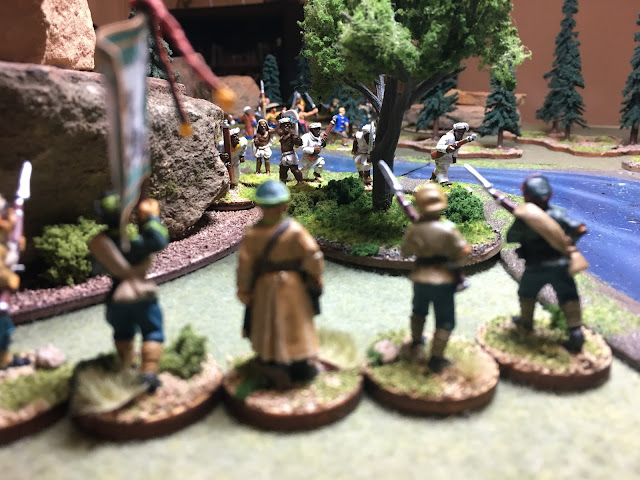 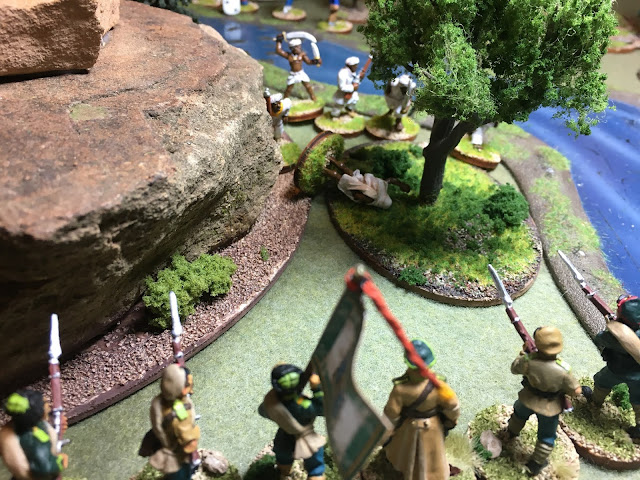 Even though the Russian Volley Fire only eliminates one figure, it is Bandit Leader #2 that is the casualty leaving Bandit group #2 leaderless. 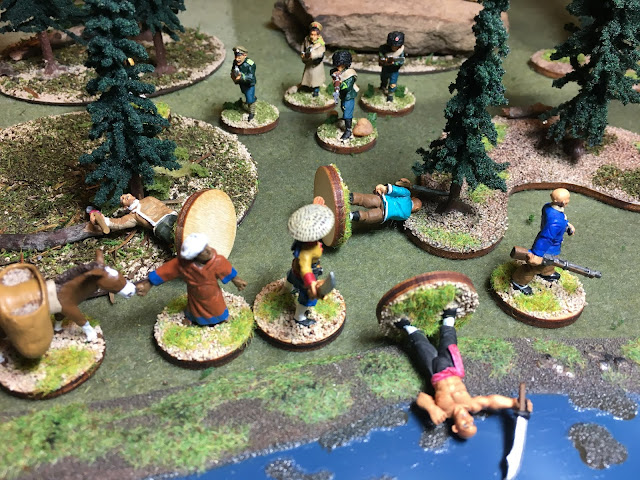 Sergeant Zaytsev's men return fire and cut down half of Bandit group #3. 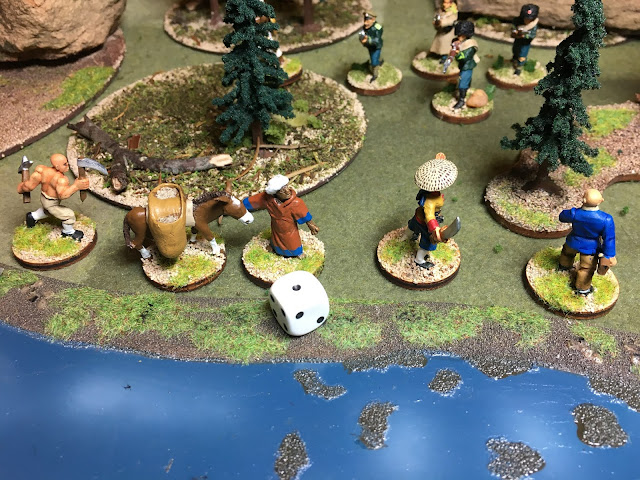 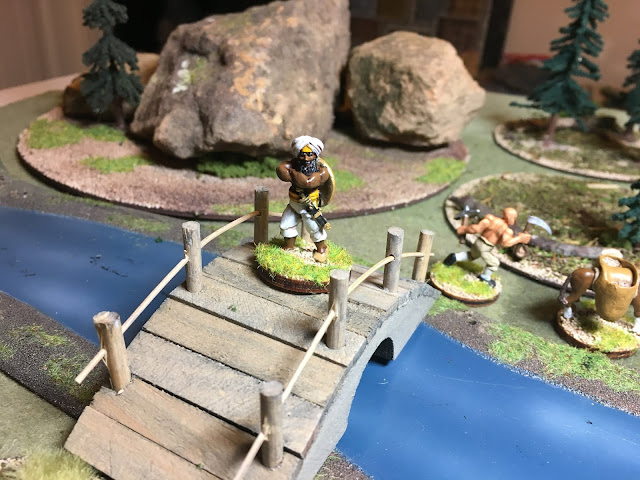 Discretion being the better part of valor, Bandit Leader #1 continues to skedaddle out of harms way and Russian bullets. 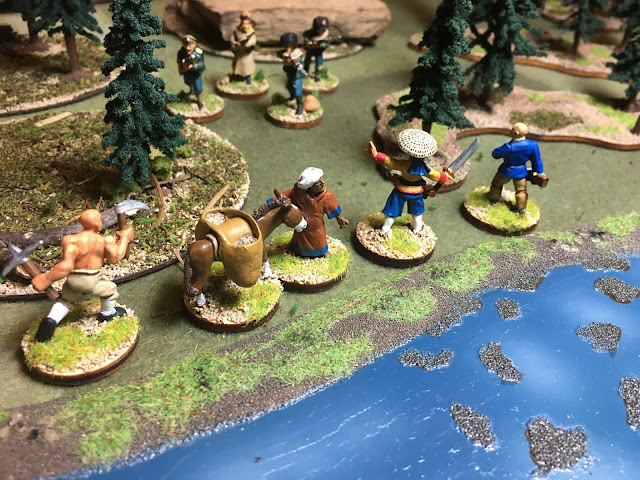 Miraculously, Bandit Group #3 rallies but that is all they can do as they look down the barrells of Russian rifles. 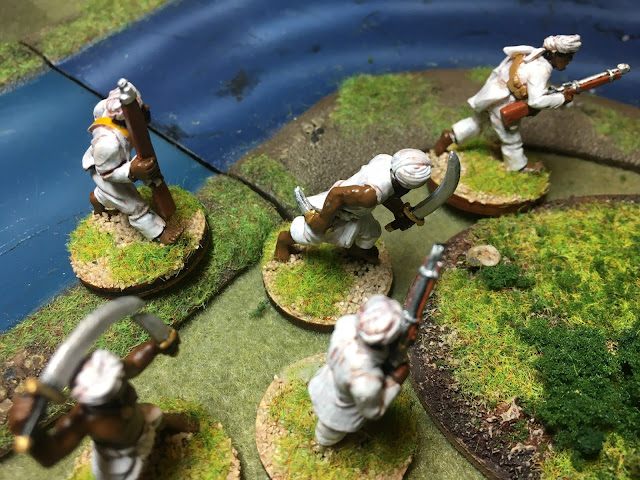 Being leaderless, there is little hope that Bandit Group #2 will activate so they take the free action of Fire instead. No effect on Captain Agorov's section. 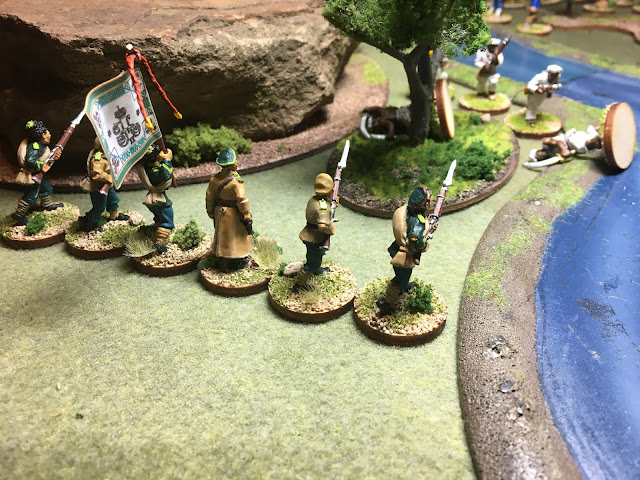 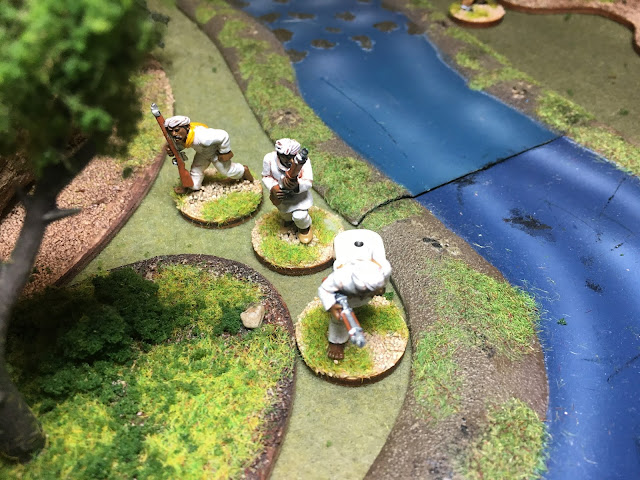 Bandit group #2 is pinned. Somehow I think the end is near. 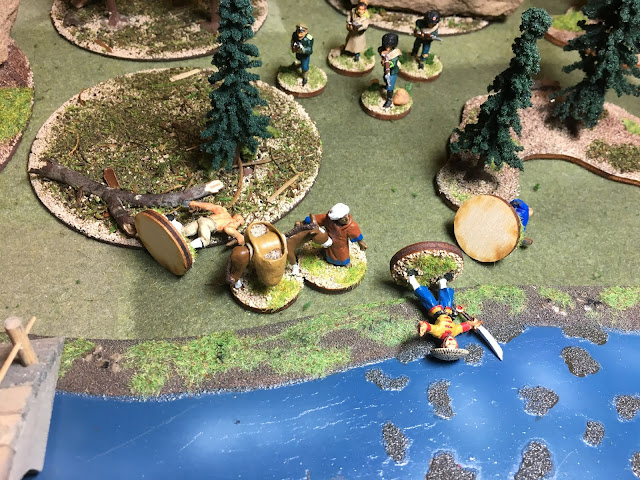 Speaking of which, Bandit group #3 is wiped out by rifle fire. 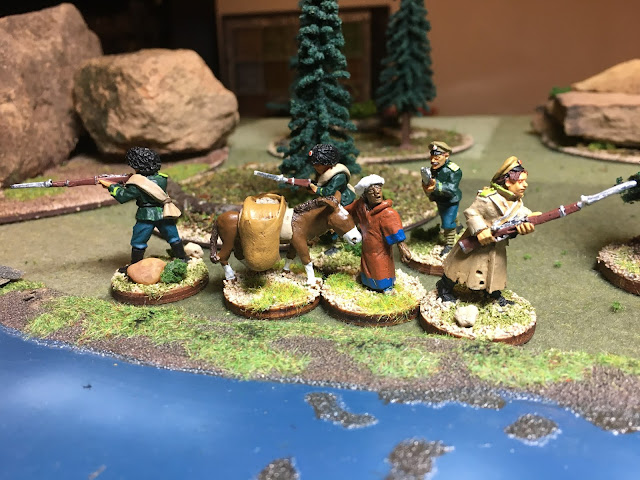 After the free action of Fire, Sergeant Zaytsev (Destined for Greatness) activates his section and Moves to secure the weapons and gold. 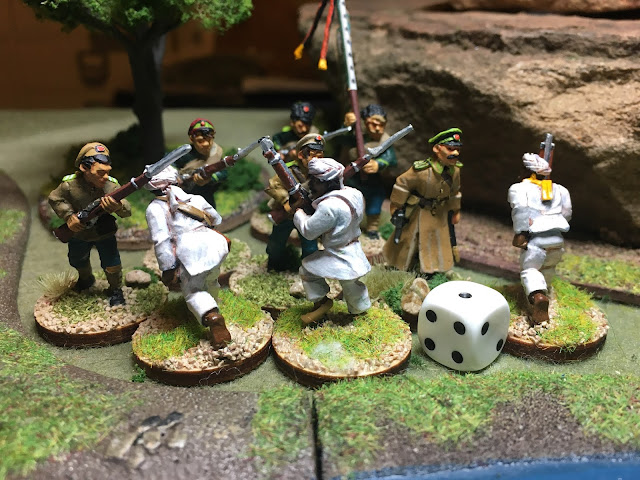 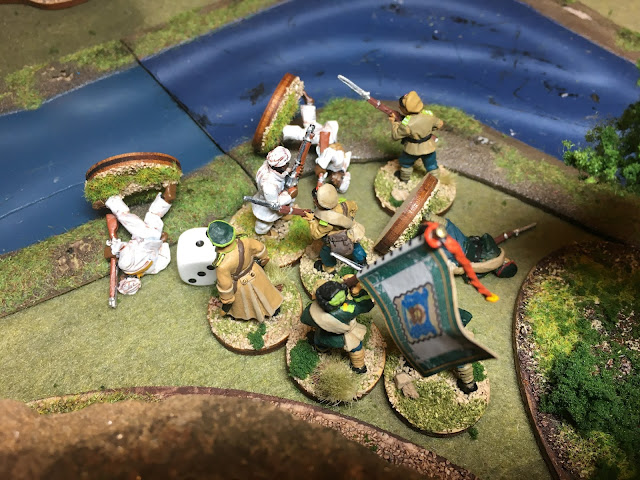 Though they win the melee, the Russians did lose one man. 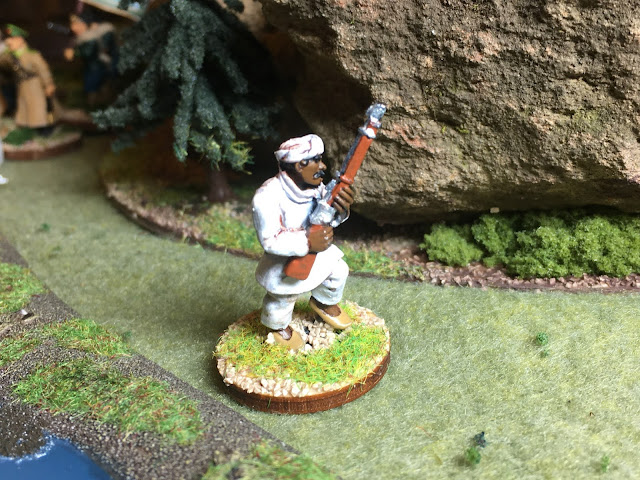 The last bandit runs for his life. 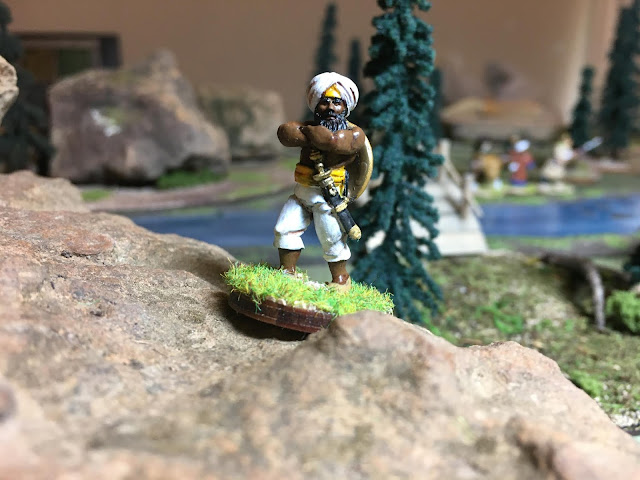 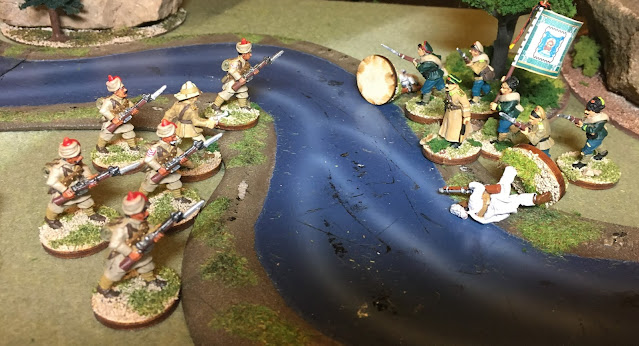 "Throw down your weapons in the name of the Queen! You have killed citizens of the Princely State of Chaimbellistan!" Shots are fired, multitudes of  1's, 2's and 3's are thrown. No one is taking out but at least someone got nicked on each side.
Well that was a fun and fast paced game. The Russians did a superb job choosing two choke points and then holding them. The bandits could not decide which way to go and I think if they would have stuck with their original plan, they would have overwhelmed or at least pushed Sergeant Zaytsev's section out of the way. Now what happens? 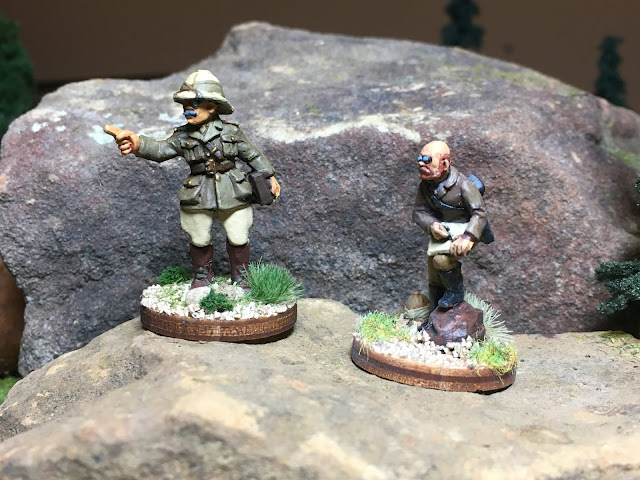 Melton Pryor sketching the Russians and dead "heroes" of Chaimbellistan. 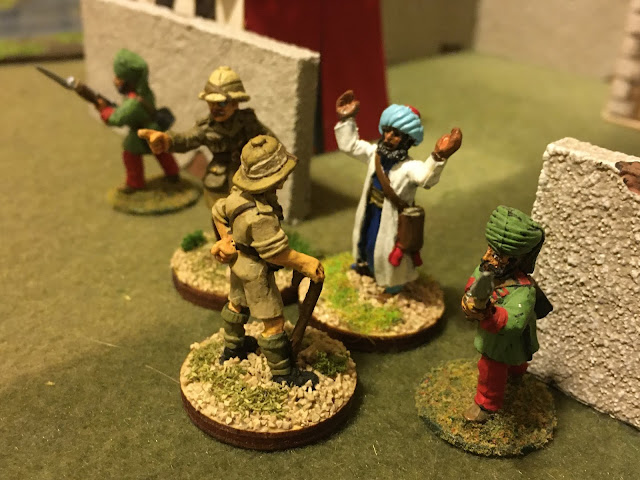 "We've been invaded! What will the British Raj do to help?" 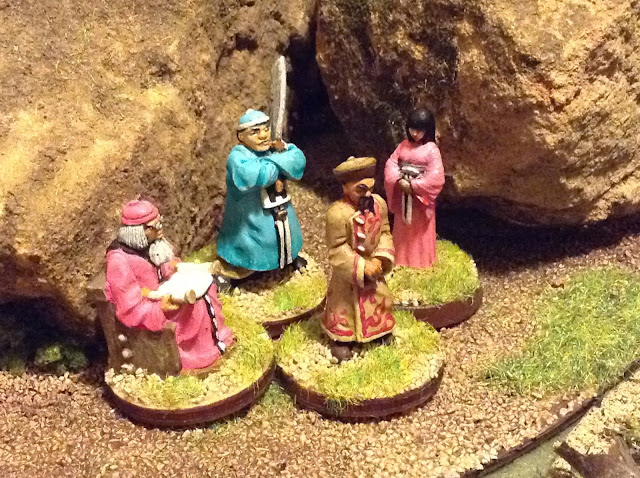 "BWAH HAH HAH! The fools. Lo Pan, you are commended for supplying the false maps to the Russians. Who could have anticipated that I would destroy two so-called empires!"
Posted by Neil at March 27, 2021