Volley and Bayonet: The Battle of Oberbratwurst: The Opening Moves

The fictional Battle of Oberbratwurst, fought during the War of Spanish Succession, will be fought using the rules Volley and Bayonet. Volley and Bayonet is a "grand-tactical" level game and allows players to assume the roles of Army and other higher level commanders. Figures are mounted on one stand and rosters are utilizing that have the unit's strength points.

Infantry units for the 18th century represent Infantry Regiments; Infantry units in the 19th century represent Brigades and are on bigger stands. For both centuries, Cavalry are Brigades.
Unlike other rules where players have to worry about the formations of their individual units, in these rules it is assumed that the Brigadiers and Colonels know their business and will deploy their units accordingly. In this game players need to worry about deploying and maneuvering their armies!
As mentioned, a roster sheet (posted in an earlier blog) is used to keep track of the status of units. Each "strength" point of infantry or cavalry represents approximately 500 men. Each strength point of artillery represents 6 guns. Most units for the War of Spanish Succession have 2 strength points each. Units lose points through long range fire and close combat (which represents close range musketry and melee combined).
Morale, command and division cohesion are all elements of the game but not overly complicated. In fact, the basic rules are just 18 pages long! Now, on to battle! 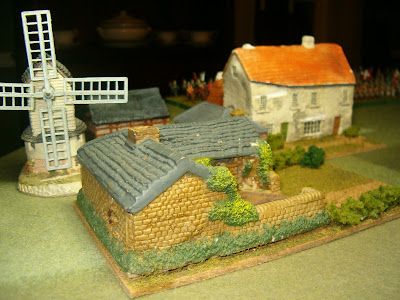 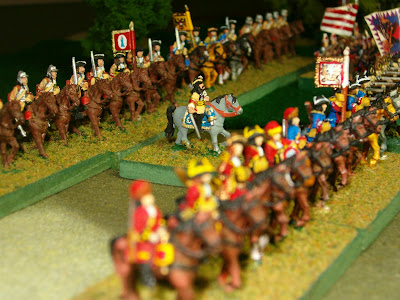 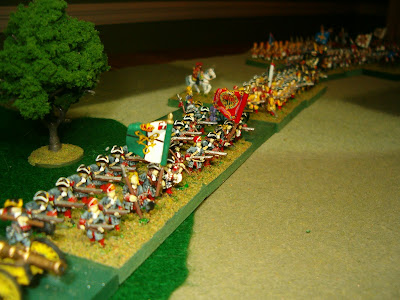 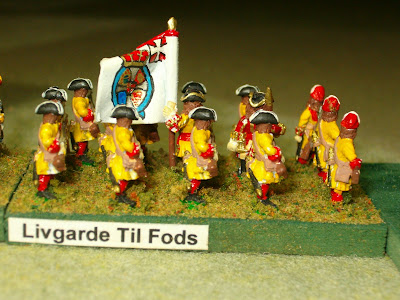 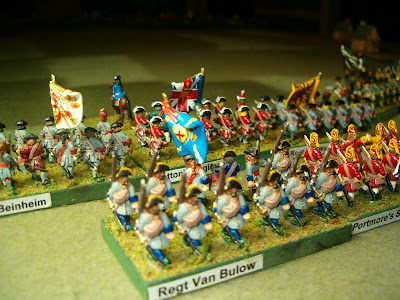 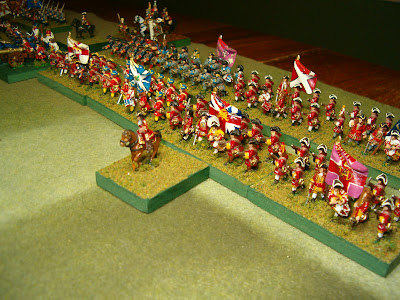 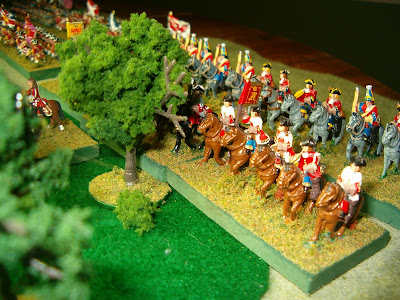 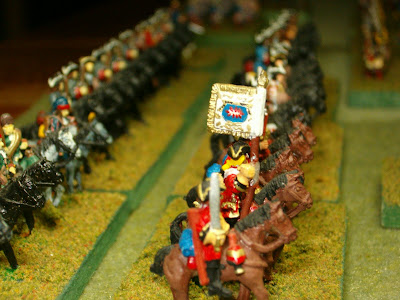 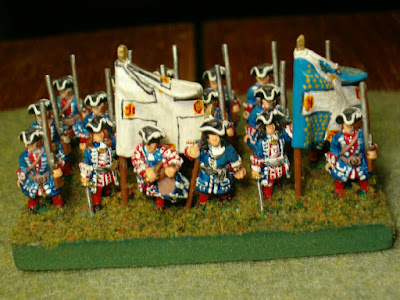 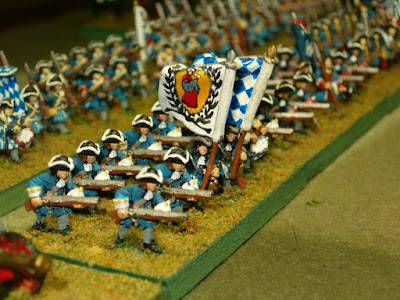 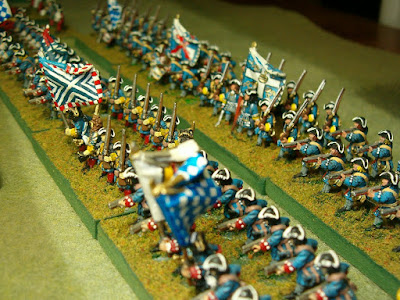 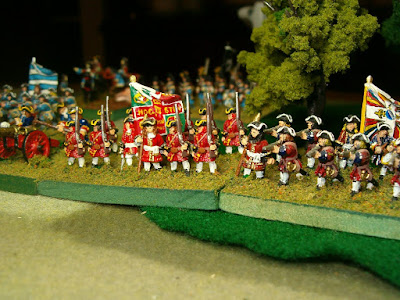 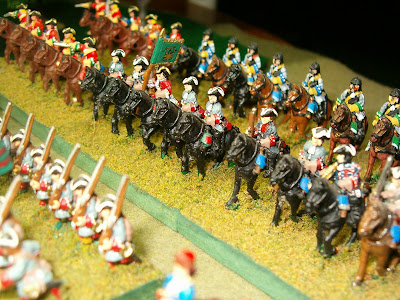 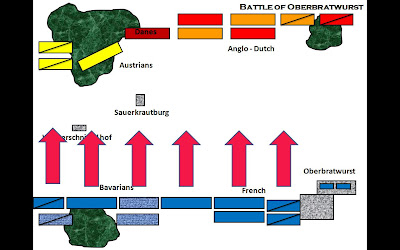 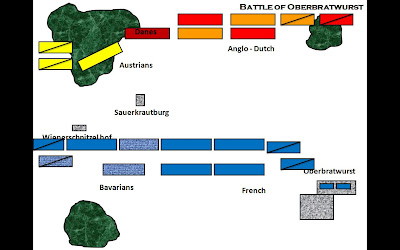 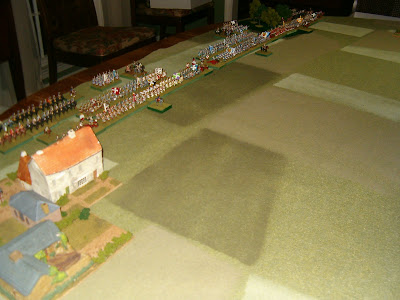 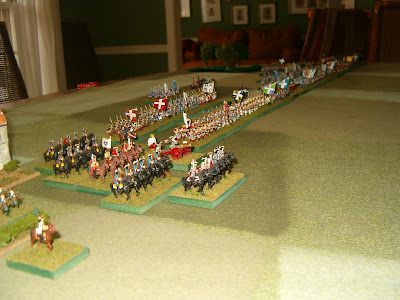 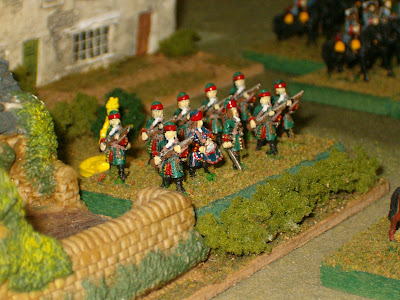 Dismounted French Dragoons occupy Oberbratwurst. The yellow marker behind them signifies that the dragoons are disorganized. In other words, they lost their "battle formation" as they moved through the streets and will need some time to reorganize.
Turn 1: The Grand Alliance. So did my advance through off the Allies? Nope. In a surprise move (at least it was a surprise to me!), it seemed like every horseman in the Allied army was bearing down on the Franco-Bavarian left flank. Then I thought - wait a minute, I outnumber my opponent in cavalry about 2 to 1 (BWAH HAH HAH!). 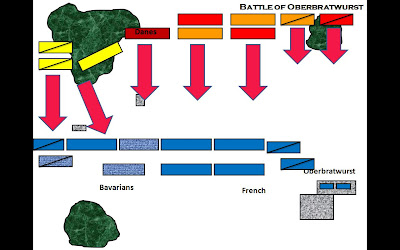 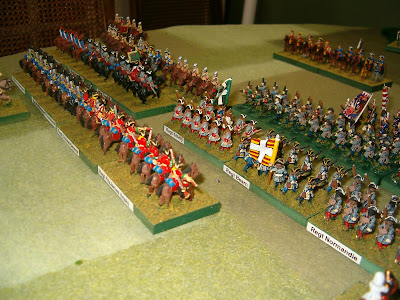 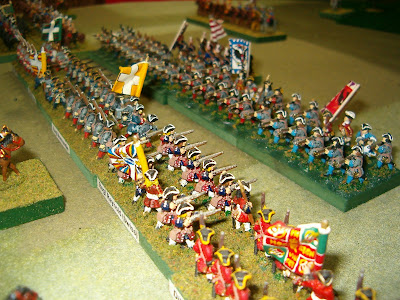 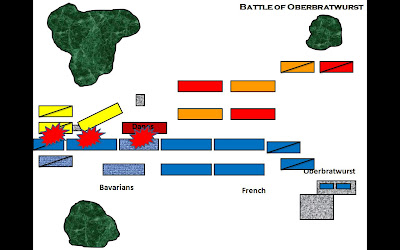 And then it got ugly. The French cavalry forgot that they outnumbered their Austrian counterparts. The furious and unexpected charge of the Austrian Cuirassiers disordered and swept from the field the majority of the French Cavalry. 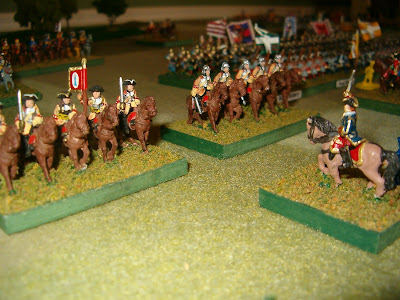 The French Cavalry Commander, the Count d'Arco, boldly stares down the Austrians as he wonders where his cavalry command went.
Next: The Franco - Bavarian Response.
Posted by Neil at November 28, 2021