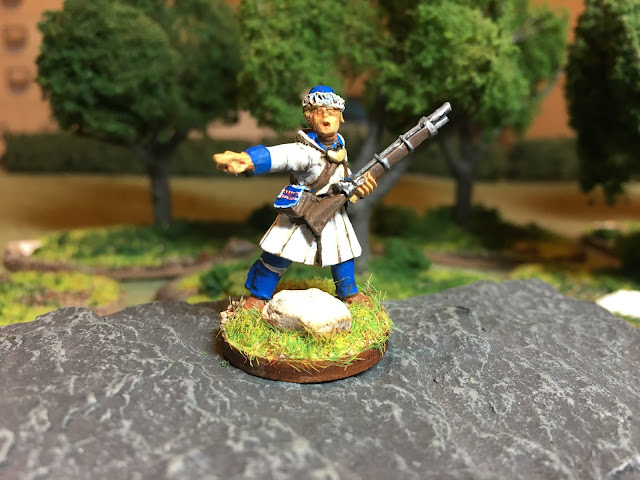 Charles Deschamps de Boishébert et de Raffetot was born in Quebec on February 7th, 1727 and entered upon a military career early in life. He became a gentlemen cadet in the Campagnies Franches de la Marine in 1739, with the comment “a promising young man, very steady.” In 1742 he joined the Quebec garrison as assistant adjutant. During the years 1744 and 1745 he participated in several expeditions along the New York frontier. 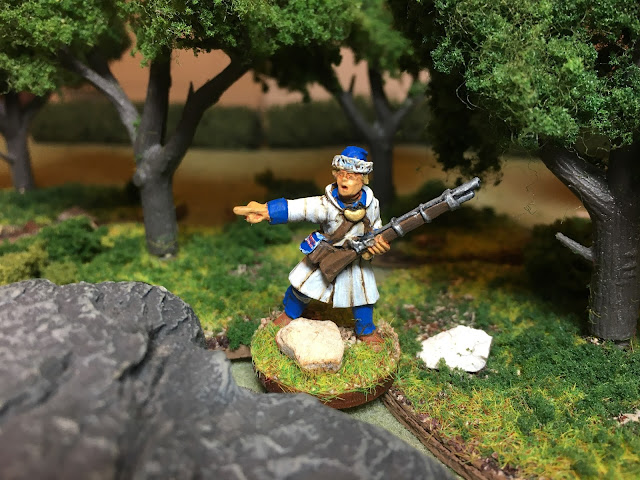 After the first Siege of Louisbourg in May–June 1745, a British force composed largely of New England irregulars proceeded to seize Île Saint-Jean (present day Prince Edward Island) and its capital Port-la-Joye, which had a French garrison consisting of about 15 soldiers and 100 Mi'kmaq. The British force consisted of two Royal Navy ships and 200 New England soldiers stationed at Port-La-Joie. Boishébert was sent to Île Saint-Jean on a reconnaissance to assess the size of the British force. After Boishébert returned, the French Army with over 500 men, 200 of whom were Mi'kmaq, went to Port-la-Joye. The battle took place in July 1746 near Port-la-Joye on the bank of the Northeast River and the French killed forty New Englanders and captured the rest.  Boishébert was commended for having distinguished himself during the battle exposing himself to danger and personally leading attacks against the enemy force. 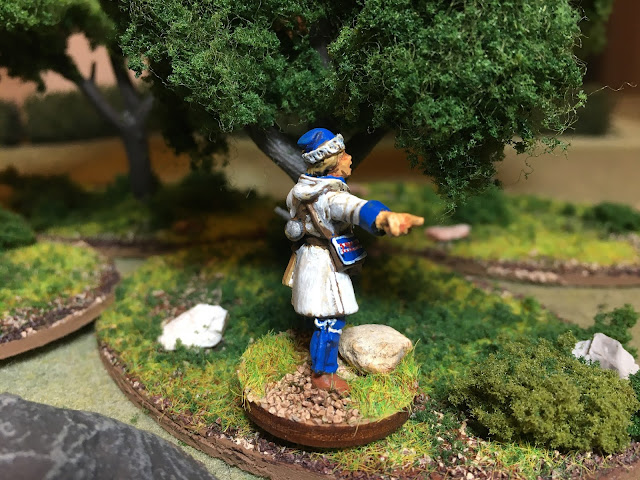 On 28 Feb. 1748 Boishébert was promoted lieutenant, and he soon was engaged in operations in yet another part of New France. The previous year had seen the threat of a general Indian uprising in the west, and in the spring of 1748 Boishébert was among the reinforcements sent under Pierre-Joseph Céloron de Blainville to Detroit, which was particularly endangered. He took part in an expedition that took revenge on the Indians for attacks that had been made on the French in the vicinity. 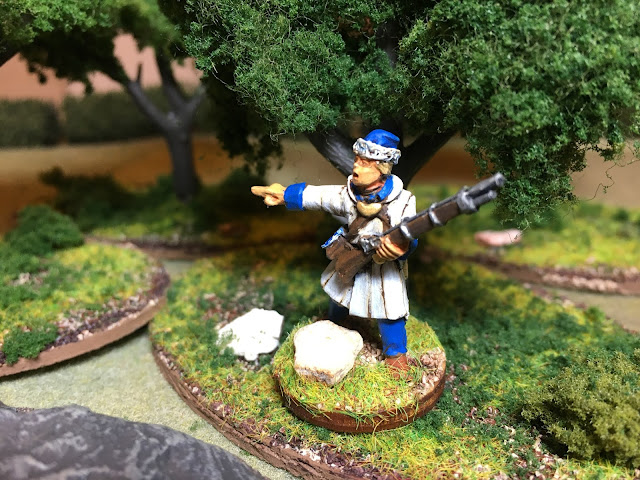 At the beginning of the French and Indian War, he was sent to take command of Fort La Tour, at the mouth of the Saint John River, and there he worked to counter persistent British efforts to establish themselves. He also made a study of the harbours between Acadia and Boston. The capture of Fort Beauséjour (near Sackville, N.B.) on 16 June 1755 by British Lieutenant Colonel Robert Monckton’s forces marked a turning-point in Boishébert’s career. Immediately after the fort fell, the British commander dispatched a large detachment against the handful of militiamen at Fort La Tour. As there was no hope of a successful outcome, Boishébert burned his fort before the enemy arrived and sought refuge among the local populace, continuing meanwhile to fight the enemy. The rest of his career in Acadia was spent working to secure the Acadians’ loyalty to France, bringing to French territory as many of those in British-occupied regions as possible, and with the Indians’ help constantly skirmishing against the enemy. 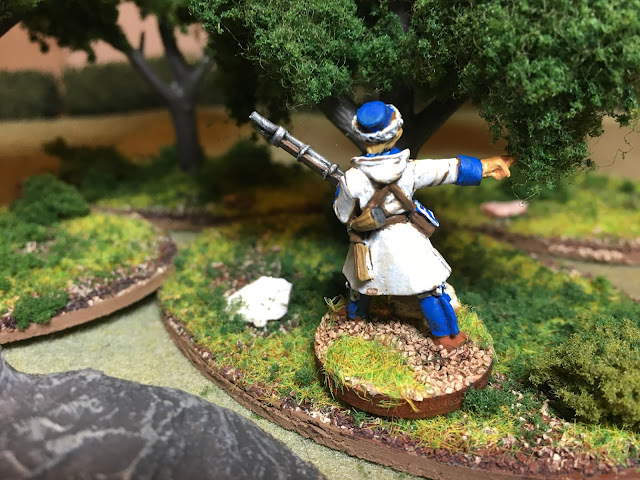 Charles Deschamps de Boishébert et de Raffetot was a real officer of the Compagnies Franches de la Marine and he is going to be the Officer for the French Forces in Rebels and Patriots (Paid Link). When I rolled for the Officer Traits for the French Officer, I knew I had to find a man worthy of the roll. From my research, he was an outstanding leader, tactician, and compassionate man. I rolled a "3" and then a "4" giving him the trait "Strategist". This allows him to redeploy 6 points of troops (which is exactly the point count of a normal unit of Compagnies Franches de la Marine) up to 12 inches away from their original deployment point but no closer than 12 inches to an enemy unit. Yikes! The British are going to have their hands full with this guy. 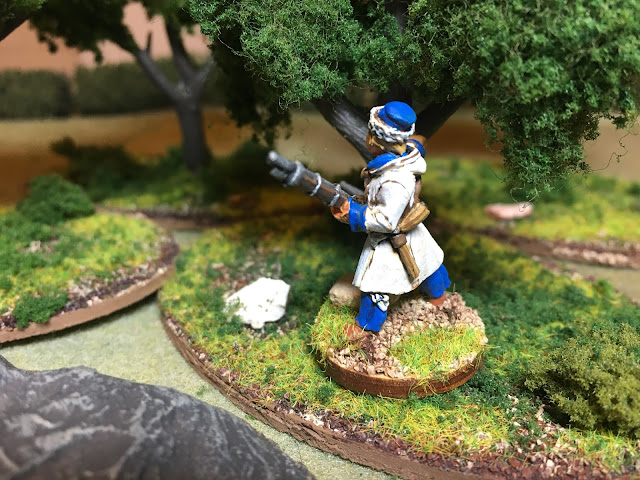 The figure of the Officer of Compagnies Franches de la Marine is from North Star miniatures. As you have probably noticed, I forgot to paint his eyes. 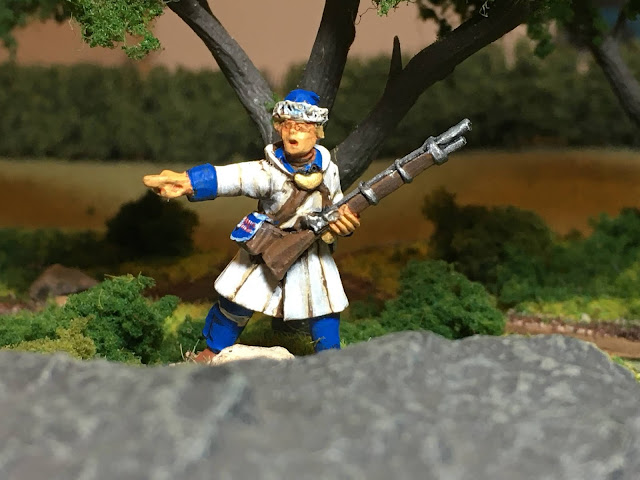